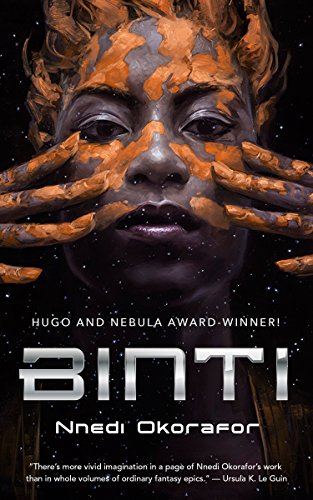 If I had an adolescent daughter, I would give her this book to read. It’s a story which just makes you realise we’ve been missing the point with sci-fi and fantasy for so long. It takes one look at all those tired old tropes of generally white, generally male fictional heroes and says…no. We’re not going there.

Instead, the protagonist of this coming of age narrative is Binti – the first of her people to attend Oomza University, a girl who grasps her own destiny with firm hands, defying expectation and prejudice to live her dreams. And at the same time doing her bit to bring about some inter-planetary harmony.

“There’s more vivid imagination in a page of Nnedi Okorafor’s work than in whole volumes of ordinary fantasy epics,” wrote the late, great Ursula K. Le Guin. And it’s true to say that every page lights a fire under our complacency about science fiction – from the concept of maths as a mental state, through to Binti’s casual acceptance of difference and diversity as a fact of interplanetary lore and life. And running underneath all of that is Okorafor’s subtle challenge to white-centric sci-fi narratives. It’s a book which makes you cry out for more heroes like Binti, who proves her strength when she seems at her most vulnerable. A must read.

I realise I’m a bit late to the party on this one, as the sixth instalment is due out in three days, but that only makes me regret not having read it sooner. Anyway, I’ve not done much reviewing for a while, so here goes…

I recently heard a radio interview in which Neil Gaiman was discussing the work of the late Brian Aldiss. Science fiction, suggested Gaiman, is a vehicle for speculation – a genre which should always make us ask ‘what if?’ It is precisely that curiosity, that desire to interrogate and push at the boundaries of possibility which drives Fletcher DeLancey’s novel The Caphenon. What would happen –  the book asks – if empathy could be used as a defensive weapon? What if faster than light travel were possible? What if gender fluidity were the norm?

These are the kinds of questions which feed into the compelling narrative of this novel – a story which fuses romance with adventure against a well realised backdrop of interplanetary politics. DeLancey’s world building is simply outstanding. From the beginning, the reader is thrown headfirst into the language, culture and traditions of Alsea, largely seeing it through the eyes of aliens who crash land their ship onto the planet. Suspicious of each other at first, Alseans and Gaians are forced to  confront issues of trust and respect if they are to have any chance of defeating a common enemy, .

While I worried at first that the main characters came across as being just a little too perfect – a lot of angst and soul searching took place within the opening chapters – they turned out to be flawed enough to seem genuine and attractive. There was always just enough tension and mistrust between Alsean leader Lancer Andira Tal and Gaian captain Ekatya Serrado to make their relationship a fascinating one. And the engaging quickfire dialogue between Serrado and her anthropologist girlfriend Lhyn was offset by scenes which revealed just how deep their love really ran.

My only misgiving about the book was the fact that – particularly towards its end – there was a tendency to relay certain scenes through Tal’s thoughts and memories, effectively info dumping. And while I understand that this was because the author probably had other priorities to focus on, some sense of the characters’ firsthand engagement with these events would have given the action greater immediacy.

However, that’s a very subjective observation. Overall, I just thought this was sci-fi writing at its very best and I can’t wait to get my hands on the next book in the series.

I read this book with a tiny bit of sick hovering at the back of my throat. And it’s kind of hard to reveal why that is, because to do so would be to give away the central twist of this story. But let’s just say, I’m assuming that Michel Faber is a vegetarian.

Seriously, it’s an irresistable story, and Faber succeeds in melding a whole set of genres – sci-fi, thriller and gritty satire – to produce what is a truly satisfying read. It turns the world on its head, it disturbs, unsettles and demands a lot of empathy from the reader for the protagonist, Isserley. It’s a book that interrogates our definitions of humanity, and prompts a whole set of questions about how we structure society, how we determine beauty, and of course how we, as ‘human beings’ impact on our environment.This is all relayed in a muscular prose which perfectly reflects the way Isserley is at once revulsed and enchanted by the world around her.

My only issue with Under the Skin, is that it hinges on one central conceit. Faber leaves sufficient ambiguity in his narrative to allow that twist to operate. Even so, as a reader I found myself querying the extent to which it works. Isserley’s reluctance to examine her own past or values is understandable from a psychological perspective, but as a reader I wanted more ‘fill-in’ here.

Apart from that, loved this book. It fascinates, shocks and enthralls on just about every level, and by the time it reaches its climax, you know there really is only one place left for Isserley to go.