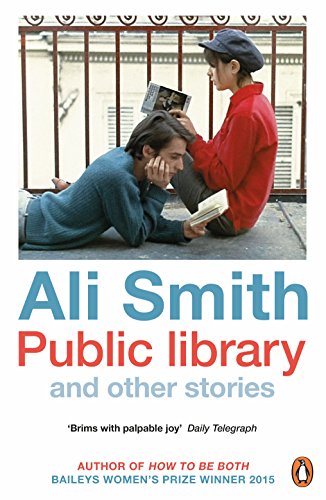 Recently I ordered a couple of ‘real feel’ copies of works by or about Ali Smith – Girl Meets Boy, and a collection of critical essays on her work. I already had one of these books on my Kindle, but as I needed volumes with page numbers, I decided to order from second hand bookshops. When both books arrived, they were coated in library issue plastic covers, and one of them still contained stamps from Dulwich public library. Coincidentally, I was just reading Smith’s volume of short stories Public Library, which addresses the demise of this treasured institution across the UK following a decade of local government cuts and austerity.

It was both ironic and deeply saddening, and it made me think of what a focal point the library was in the small Derbyshire town where I grew up. (I’m happy to say that’s one book palace which survived the chop). A visit to the library meant opening up new worlds: a very private new world as a reader in a very public space.  And it meant measuring one’s progress from childhood to adolescence when you received the adult reader card – a rite of passage noted by a few of the contributors to Smith’s volume. Libraries are communal spaces and democratic spaces. They function like an enormous secret we’ve all been let in on. Downloading an ebook is just not the same – you don’t have that same sense of sanctuary, or of paying books their due respect while celebrating the fact that this is one of the few times life genuinely gives you something for free. Because without an internet connection and a credit card, you’re mostly forced to source your books the pirate way. And that demeans all of us – authors and readers.

The short stories in Public Library are also a celebration of the act of reading itself, of words and their power, of writers and their histories. Smith has the most amazing ability to mine for joy and subversion in all of her work; to eke out a space in what we take for granted, enabling the reader to see it from new perspectives. I can think of no other author who could effectively pair a tale on credit card fraud with an investigation into the death of D H Lawrence. Or who could trace the breakdown of a marriage to an obsession with Katherine Mansfield. Smith is best at making the incongruous seem a vital part of lived experience – at tracing analogies and associations between the most disparate of pairings. She’s a rebel writer whose work casts an even light over popular culture as much as the literary past, if it will draw her reader’s attention to an idea or image. And snaring our attention is something she never fails at.

Public Library is a paean to our most treasured communal spaces, and to how books connect us across geographies and across time. An essential read and a provocative one.

Neo-gothicism seems to be the order of the day in contemporary British literature, with writers like Sarah Perry, Sarah Waters and Andrew Michael Hurley all offering new takes on a much out-moded genre. What all these authors have proved is that the gothic – with its hauntings and secrets, its dark retreats and the way it plays on our most hidden fears – offers perfect territory for exploration of all that we would still repress, even in our current age of confession, self-expression and over-sharing.

What Perry achieves in Melmoth is nothing short of astounding, and I have to admit that as much as I enjoyed her previous outing The Essex Serpent, Melmoth proved a more satisfying read, abounding in cunning devices which deceive and challenge the reader. To such an extent, in fact, that Perry claims one American newspaper was entirely taken in with the myth of Melmoth when in fact it was her own invention! Taking her cue from Charles Maturin’s 1820 novel Melmoth the Wanderer, Perry transforms Melmoth into a biblical figure – one of the women who witnessed the resurrection of Christ, but refused to acknowledge it. As a result, she is forced to walk the earth until the day of judgement, watching the guilty and, in her loneliness, summoning sinners to walk with her.

Though set in 21st century Prague, Melmoth has a timeless feel which Perry creates through artful use of dialogue and description so that, in her own words, she renders the present ‘strange’ (podcast: The Guardian) or uncanny, thereby creating the perfect gothic backdrop to the horrifying story which unfolds. And what emerges is a story which terrifies far more through its exploration of human cruelty than its supernatural references. The narrative pivots around the shy, shrinking figure of Helen Franklin: an English translator enduring self-imposed exile for a crime committed long ago. Because Helen refuses to confront her past, the reader is denied knowledge of what that crime might have been until the very end of the novel. In stead, Helen sets about uncovering the myth of Melmoth through stories left behind by the Wanderer’s victims, each of which reveals an aspect of human cruelty and weakness. And by the time Helen is ready to examine her own conscience, we are left in no doubt that her sin was truly grave.

What I really loved about this book was its structure: the stories slotting inside one another like the matryoshka dolls sold to tourists on the Charles Bridge, with Helen’s own personal narrative both framing and nesting inside each one. Perry’s skill as a writer means that the novel glides over a range of genres and styles, from biography to travel diary, with subtle intertextual references ranging from Maturin to Kafka. And the story pays out its surprises with such perfect pacing that its finale leaves you breathless – and in no doubt that while the author has dredged humanity’s dark side, it’s the light which remains. This is literary sleight of hand at its most dexterous – an absolute masterpiece.