Sarah Perry’s latest novel proves to be as elusive a beast as the Essex Serpent itself: a story which coaxes the reader into a literary terrain every bit as shifting and unstable as the salt marshes amongst which it is set.

Following the death of her abusive husband, Cora Seaborne sets about reinventing herself – stretching her wings and re-evaluating her relationship with her friends, and with society in general.  Freeing herself from the disapproving gaze of Victorian London, Cora moves to Essex in the hope of scouring the local beaches for fossils. Intrigued by the possibility that a “living fossil” may have been sighted near the village of Aldwinter, with local sightings of a winged sea beast reported, she moves there with her friend Martha and autistic son Frankie.

In truth, if there is any geology to be had in this novel, it is of the personal sort – the gradual chipping away at layers of emotional sediment to discover the uncomfortable truths which Cora – and many of her friends – keep deeply buried. On encountering local Vicar Will Ransome, Cora dredges her own sense of self to make sense of her feelings for him, while Will finds himself torn between the superstitions of his congregation and the foundations of his own religious belief. This is a story which explores the porous boundaries between pleasure and pain, between faith and superstition and between love and hate. Imbued with all the rich ambiguity of a Turner painting, it throws an alternative view of the Victorian age into relief – one in which sexual desire and sexuality lurk just beneath the surface of public consciousness, and are easily implied if not expressed.

Comparisons have been drawn between Perry’s sublime work of Victorian pastiche and Bram Stoker/Dickens. I didn’t quite feel that myself – it doesn’t really function as gothic, or as social commentary – at least not directly. I did, however, find myself thinking about Hardy as I read it: of his pivotal themes of sin and redemption, and of his exposure of the hypocrisies of nineteenth century British society. But what I really find most valuable here, is the uniqueness of Perry’s writing, and the way she gives a voice to characters whose stories are repressed or never heard at all in Victorian literature. A book which very definitely deserves to be re-read.

This is Mitchell departing – to some extent – from the cats-cradle style complexity of his earlier plots. Where his other novels are kind of stretched across time and space, those dimensions are condensed here into one truly spooky location: that of the elusive Slade House. And while this book doesn’t offer up the thrills and spills of a full on horror story, it really worms its way under the skin.

It probably helps to have read The Bone Clocks first, as that introduces some of the arcane concepts that Mitchell develops here. But what really makes this story so compelling is the author’s chameleon like gift for getting inside the heads of his characters – for exploiting and exposing their weaknesses and insecurities. And while Slade House doesn’t play out on the same global scale as novels like Cloud Atlas, it still presents a fascinating weave of characters and concepts, many of which feed into his other books.

There’s a steady heightening of atmosphere as time reveals the crimes committed in Slade House and the stakes are raised for its anima eating inhabitants. And some genuinely unnerving twists and turnarounds occur as Mitchell’s ghouls manipulate their victims’ sense of reality, and that of his readers. In all, a great return to form after the convoluted atemporal shenanigans of The Bone Clocks. 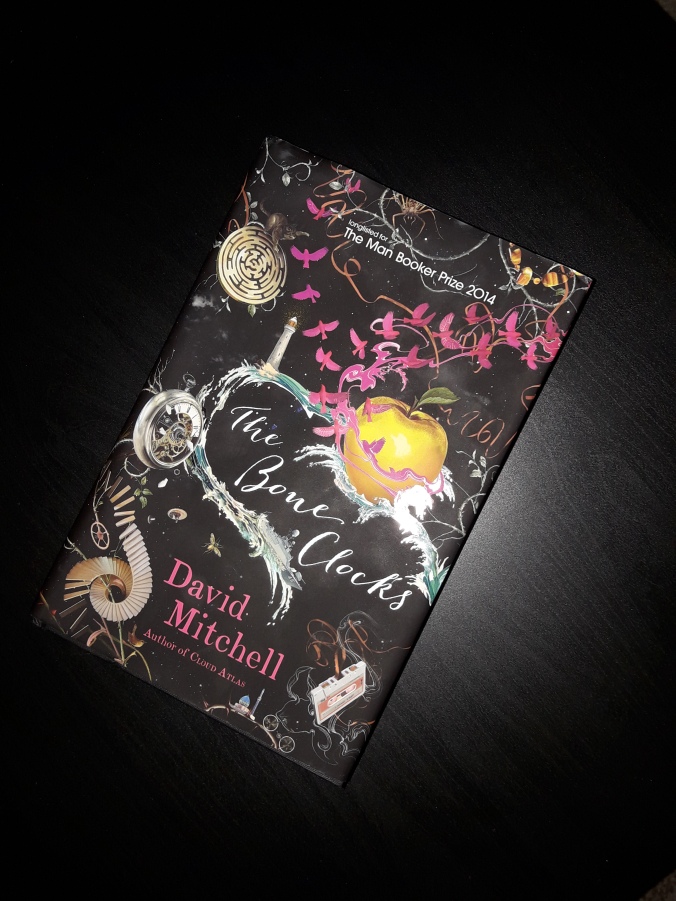 I’m in two minds about The Bone Clocks. If I hadn’t read anything by David Mitchell before, I’d probably be bowled away by its ingenuity: a story which begins in the recent past and stretches into an apocalyptic future, framed through the perspectives of a set of well drawn and irresistably flawed characters. I’d also have marvelled at Mitchell’s genre-bending antics, flicking with almost casual ease from thriller to fantasy to sci-fi by way of some biting social and political satire. And there is no doubt that the sheer audacity of inventing an entire metaphysical system – a metaworld populated my metalives – would have had me on the edge of my seat.

But there was one problem, which is that Dave’s kind of done all of this before, and he’s done it so much better. He’s done it better by allowing the reader to fill in the gaps, as is the case in Ghostwritten, or by taking a very simple idea but playing it out on a massive scale as in Cloud Atlas. What seems a weakness in The Bone Clocks is that this is where Mitchell sets out his stall. He literally tells us, the readers, what’s going on. Granted, there’s the great opening mystery – a missing child, an apparent double murder, a hint at psychic abilities. But that air of mystery gradually collapses in on itself as we learn about the Horologists and their soul-sucking foes the Anchorites. And worst of all, those mysteries which were so elegantly played out in earlier novels such as The 1001 Autumns of Jacob de Zoet are now revealed, laid bare and somehow lose something in the telling. Laid bare, furthermore, in dialogue which is sometimes more cheap sci-fi flick than Booker long-listed novel.

So while I’m still in thrall to the literary magician that is David Mitchell – a writer capable of creating an entire parallel universe over the course of his writing career – I do wish he’d delivered up his secrets with a little more subtlety in The Bone Clocks. Unless, of course, there are more secrets to be delivered…